Today we played tourist. We enjoyed a lazy morning while waiting for the sun to burn off the morning fog. 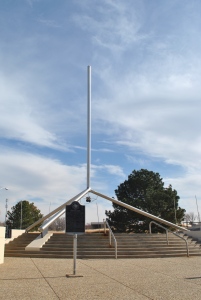 The Helium Centennial Time Columns Monument is a 60 foot, three-tiered spire with a large model of a helium molecule in the center of the spire. The monument was erected in 1968 to commemorate the centennial of the discovery of Helium (HE) in 1868 by French astronomer Jules Jansse and British astronomer Norman Lockyer.

In 1925, the Federal Government set up the National Helium Reserve in Amarillo where 1 billion cubic meters of Helium is stored in a natural geologic gas storage formation, the Bush Dome reservoir, located about 12 miles northwest of Amarillo.

Due to the debt incurred in collecting the helium, Congress decided to phase out the reserve. The  “Helium Privatization Act of 1996” (Public Law 104–273) directed the US Department of the Interior to start liquidating the reserve by 2005. While the reserve was slowly dwindling, in 2013, the House of Representatives voted to extend the reserve under government control.

Next we drove about 10 miles west and visited the infamous Cadillac Ranch. 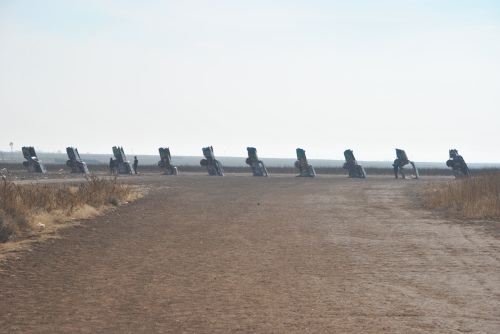 Cadillac Ranch is the creation of  Chip Lord, Hudson Marquez and Doug Michels.  It consists of 10 Cadillac automobiles that represent the evolution and death of the tailfin that defined Cadillacs from 1949 to 1963. The original project was completed in 1974 and subsequently moved to its current location in 1997 about 2 miles further west.

From a distance, the cars do not look like much. Up close, the cars are an interesting sight. 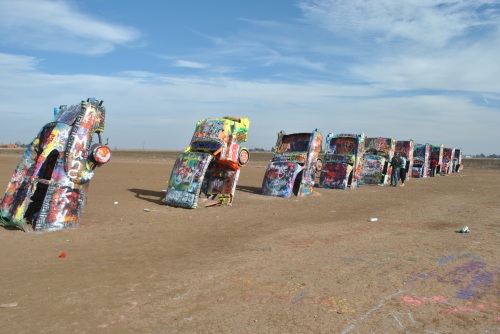 Forty years of spray painting  preserves the steel bodies pretty well. In some spots, the paint has been carved away so visitors can see just how many layers of paint are there. The photo on the left shows the depth of paint. The blowup of the same photo shows the individual layers of paint that has been applied. 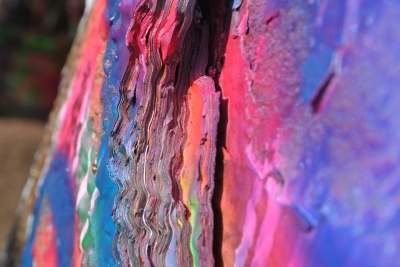 There are some sections of some cars where the depth of paint is even greater than this. Pretty amazing, if you ask me. Even the undercarriage of these vehicles is canvas to graffiti artists.

One problem with allowing the public to have open access to this display is the amount of liter that is left behind. There are two dumpsters at the entrance, but I guess visitors cannot see them. I imagine someone comes out here to clean up the spent paint cans. It is sad to see the public abuse this display by litering. Apparently some feel liter is an art form.

Ready to get up close and personal with these 10 works of art? Here they are. You can click on any photos to see even greater detail than what you see here. 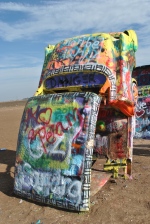 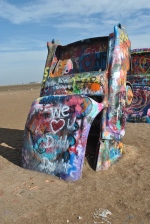 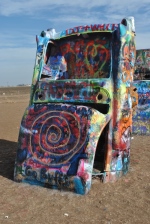 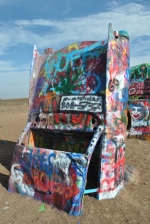 Hope you enjoyed the day as much as we did. Thanks for stopping by. Y’all come back now.

This entry was posted in Texas and tagged Cadillac Ranch, Helium, Time Capsule. Bookmark the permalink.

One response to “Playing Tourist”